HOW OFTEN ARE YOU ZEN?

If you google the word ZEN, you will find several definitions. Here, I am choosing a definition of being Zen that I read about in one of Eckhart Tolle’s books, and it goes something like this: “To do one thing at a time”.

Starting writing this article standing by the kitchen counter, preparing myself a cup of tea and at the same time wondering if I should call my sister before or after picking up my daughter from the bus stop in half an hour’s time – I would definitely not fit into that zen definition right now! However, this is maybe how most of us function throughout our day? 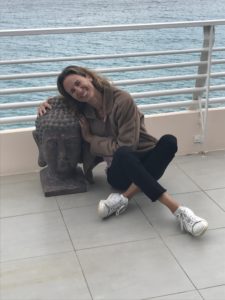 I read about multitasking in an article about healthy minds and mindfulness meditation last year. Many of us pride ourselves of how good we are at multitasking, but did you know that it is exhausting for the mind? When you multitask, your mind is not handling several things at the same time, your mind is actually jumping back and forth from one task to the other in super speed, exhausting itself.

So, back to the mindfulness raisin exercise I described in an earlier blog post last month (“An encounter with a flower”). I once guided a friend through the 10-minute slow process of looking at a raisin, then feeling it in his hand, placing it in his mouth, and finally tasting and swallowing it. After the exercise he said he felt so calm because his only “job” had been to give his full attention to the raisin, nothing else. He hadn’t felt that calm for months! A moment of zen? I think so. What I like about this is the fact that giving your full attention to only one thing can make you feel good. This must be a great incentive to placing our attention more often on only one thing as often as possible during our day. I see it as feeding the mind with goodness.

I have included a picture of my new “zen-friend” – I hope it is acceptable to buy something materialistic to get some help in focusing more frequently on one thing at the time! Wishing you well X

My name is Annette. I am a Yoga Academy Certified Teacher (BWY-Accredited School) and started practising Hatha Yoga over 20 years ago. Holding a certificate from Bangor University to teach mindfulness-based courses, I incorporate my knowledge of mindfulness meditation in all my yoga classes. I have two grown-up children and live in Wimbledon.